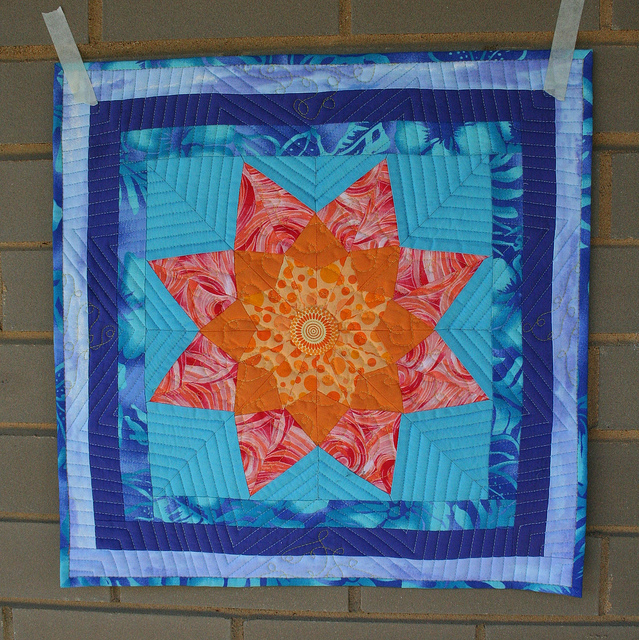 Here’s the finished Doll Quilt Swap 13 Mini!  I decided to call it Sunset Star.  I based my color choices on a sunset photo taken by one of my friends and used the 3 Layer Star paper piecing pattern by Mommy’s Nap Time.  My partner, who I can now reveal was Paula, asked for modern quilting and bright colors.  I found out through the message boards that her favorite color was purple, but that she’d also been into the pink/orange combination and that she loved paper piecing.  A match made in heaven? Maybe… 🙂

Enough about that, though.  What I really wanted to talk about was the QUILTING of this beast: 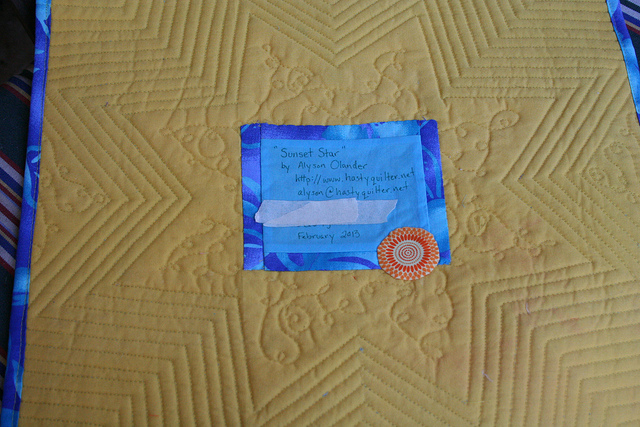 Starry (can I call you Starry?), Starry and I did NOT agree on its quilting.  This was a battle to the death and I did not come out on top.  I really, REALLY wanted to do something different than my usual, and settled on “Feathered Hearts” from Leah Day’s 365 free motion project.  I had the perfect thread for it too: a pretty peachy-pinky one that went perfectly with the star. I did a little scrap test and adjusted my tension. I got myself all comfortable. Then I started. My thread broke. I re-threaded and picked up where I left off. It broke again. I checked the tension – the thread seemed awfully tight in the machine. I adjusted the tension again. The thread broke AGAIN. I thought it must be because I was starting the middle and there was a lot of seams right there in the center (you know, since the star pieces all meet there).  I decided to tackle the feathering parts and leave the hearts for later. Skipped stitches. MORE skipped stitches. Another thread breaking incident.

At this point, I didn’t know if I could recover the quilt.  I mean, it was pretty dense quilting since I was going so slow. I pulled the whole thing out of the machine and walked away.  When I came back to it, I started the long, long process of picking out the quilting I had already done. Luckily, with lots of picking, spritzing (with water) and pressing, the quilt recovered almost completely. Except the center. It was then that I decided the star needed a literal focal point at the center, both to cover the battlefield and to complete the piece.  I was super worried that it would just look thrown on there, but in the end, I think the little circle does complete the piece.

After that, I changed out my thread for some yellow in a different brand, gave up on the feathered hearts and got down to the business of stitching that sucker in happy, flowing little loop-de-loops in the star and echoing angles in the blue areas. So much more relaxed!  Of course, this was too good to be true…as I reached the outer edges it quickly became apparent that my blue thread was running dangerously low, so I made a quick switch BACK to the yellow for those little loop-de-loops along the sides.

For a piece that really DIDN’T WANT to be quilted, I think it turned out alright. But I am going to get those feathered hearts right if I have to die trying.